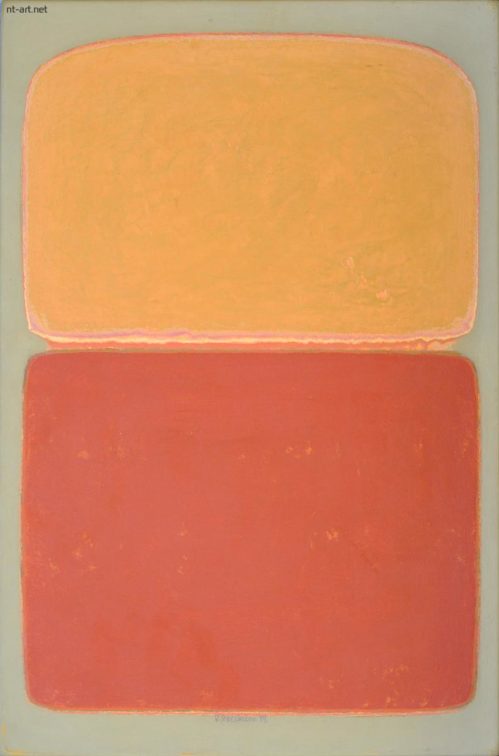 Volodymyr Strelnikov was born in Odessa in 1939. In 1978 immigrated to Germany. In the same year, the artist exhibits his work in the West. From 1990 visits Ukraine with exhibitions – solo and in a group, along with other artists of the creative association `Mamai`: V. Basanets, V. Marinjuk, I. Bozhko, V. Sad, N. Stepanov, A. Stovbur, S. Savchenko, V. Tsyupko.

`…All of his walks, which began in the early 60`s of the last century and continuing into the present century, was originally not assumed a fellow traveler who is wandering nearby, overcoming the artist questions and advice, and not keeping up with his long strides and still light feet.

What distinguishes the walk from traveling? … I suppose that walking is not tied to the route. You can change the direction and goal of the movement in accordance with your mood … unexpected encounter, gust of wind, vague desire…

On the way, artist meets people, dogs, cats, houses, trees, fences, moon – and who knows what else. And all this he is carefully (the grandson of the teacher of calligraphy!) folds into a linen bag from Munich supermarket…

At home in Odessa (at the corner of the Elizavetenskaya and Torgovaya streets) he sorts trophies – phantoms and simulacra – on boxes and folders, where they are languishing and waiting in the line. If they are lucky, then wander off to excellent sheets of paper and carefully primed wooden plank, where will alive, sparkle and surprise you; please and touch both- you and us.

Well, the color and shape in his works as always – at height standard.`

Works of the artists are in museums of Ukraine, as well as in numerous private collections in Ukraine, Russia, Austria, USA , Germany, Canada and France. This is the third solo exhibition of Volodymyr Strelniov at NT-Art Gallery (first solo exhibition took place in July 2009), featuring the oil paintings and watercolors of the period from the 1960s to the 2010s.