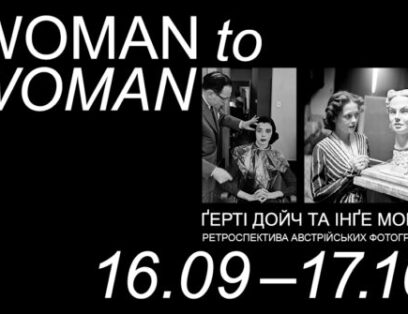 Dymchuk Gallery together with the Austrian cultural forum in Kyiv presents an exhibition of the XX century’s prominent photographers, Gerti Deutsch & Inge Morath. The project is part of the Calliope Austria programme, which highlights the contribution of women to art, culture and science.

In this exhibition, the two photographers engage in a visual dialogue. Their ways crossed for a while in the 50’s. Both women managed to succeed in a profession previously dominated by men. They worked for some of the most important visual media of the time. Gerti Deutsch for the British magazine Picture Post and Inge Morath for the French agency Magnum. Both were committed to a humanist and educational tradition of documentary photography. In their work, both worked with the image of a person in their cultural environment.

Out of a huge amount of the photographers’ works from the FOTOHOF archiv, only those depicting women were selected for the exhibition. They are shown in pairs, one photo by each author, so that the photographers seem to engage in the imaginary dialogue about the image of the woman. Both artists showed women in a straight and profoundly intimate way that becomes even clearer in the comparison.

From 1937 till the early 60’s she made numerous photo reports for Picture Post, Nova, Holiday, Queen, Harper’s Bazaar, The Tatler, as well as for the Swiss magazines Atlantis & L’Oeil. Her entire artistic heritage has been collected in the FOTOHOF archiv.

From 1953 she worked at Magnum. She travelled to numerous countries & territories around the globe including Iran, Iraq, Syria & Jordan (1956), down the Danube river (1957 & 1958), Mexico, Tunisia, Austria, Czechoslovakia, Italy, Germany, and the USA.

Fotohof has published numerous of her illustrated books and a large part of her artistic estate is in the FOTOHOF archiv.