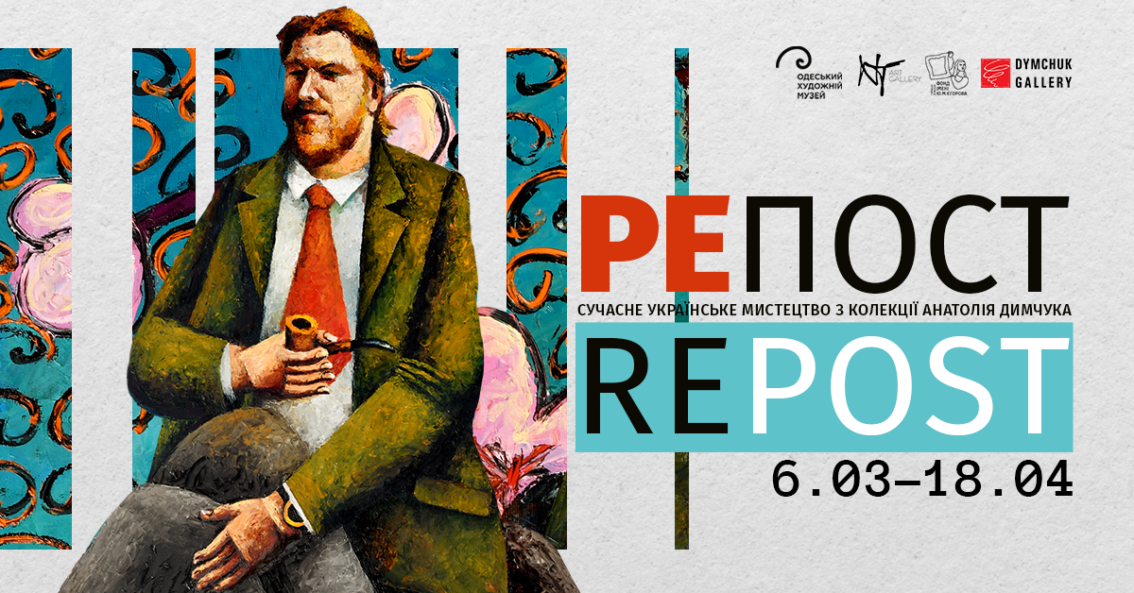 REPOST. Modern art from the collection of Anatoliy Dymchuk

Anatoliy Dymchuk’s collection is one of the most significant art collections in Ukraine and the only one in Odesa, which comprehensively represents the current trends of contemporary Ukrainian art of the independence era: from the early 1990s till present. The collection emphasises on works of artists who have established themselves in Ukrainian trans avant-garde and other areas of the «new wave». Anatoliy Dymchuk’s  collection includes both first magnitude stars and young authors. It contains iconic, programmatic works that any museum would envy. The Odesa audience had an opportunity to see some of these works more than ten years ago, and some of them will be a discovery — they will be first presented in the REPOST project.

This project is a REpresentation of Ukrainian POSTmodernism — the artworks are selected from vital Ukrainian artists of the 1980s — 2000s: Serhiy Bratkov, Leonid Wojciechow, Oleksandr Gnylyts’ky, Ihor Husev, Oleksandr Zhyvotkov, Oleksandr Roitburd, Arsen Savadov, Oleh Tistol and others. They constitute an important visual archive of Ukrainian art from the late Soviet art trends to the present day.

REPOST is a peculiar REinterpretation of POSTmodernism rethinking the artwork of Ukrainian artists, which has not lost its relevance for decades.

The art of postmodernism is the art of anxiety and helplessness times. Most of the exhibited artworks are vivid, collageous, full of allusions to different cultural layers, including mass culture. This is how artists portray the world, which has lost its systematicity and harmony and has become an arena of mixing coincidences, in which authorities and truths are devalued, and all the achievements of humanity are reduced to discourse. In a sense, these large-scale paintings reflect the hypertrophied visuality of an era where being visible is a challenging task. Behind the irony and the game, which can be shocking, lies a balanced attitude to the artists’ theme, courage, and intelligence.

An element of artistic language is the REminiscence of POSTmodernism. That artists create new meanings through «borrowing» the use of images and stylistic devices from the past, their creative and intellectual rethinking.

The artists appeal to the objects-images, which demonstrate the features inherent in POSTmodernism: mixing of contexts and identities, refusal from truth searching, ironic fragmentation of pieces of ideas and images, losing a sense of history: time and space unite in «eternal today».

REPOST is a REvision of POSTulates — rethinking of basic ideological, political, moral and artistic doctrines of totalitarian Soviet period. Ukrainian realities in the artists’ works are represented by a number of unsettled, unresolved fragments-problems: post-Soviet mentality and collective nostalgia for the past are ironically serious, skeptical and defiant in their works.

The first Anatoliy Dymchuk’s curatorial project in Odesa and Kyiv in 2009-2010 exhibited artworks of Ukrainian artists of the 1990s, and was called RESTART. In a sense, our exhibition is a supplemented REPOST of the RESTART. In a foreword to the catalogue, Dymchuk said: «We emphasize your attention to the Ukrainian modern art, not forgetting that its existence can only be possible in the international context. We are gathering stars in Odesa, not for the sake of status, but for another truly productive step». Over the next decade many «productive steps» have been taken: contemporary Ukrainian art from Dymchuk’s collection has been presented in many Ukrainian and European art forums.And today we are again «gathering stars in Odesa» — Anatoliy Dymchuk: from RESTART to REPOST.